A big, amiable man in a loud orange T-shirt and Madras shorts, Torres strolled through the complex of the 124 units of public housing at Franklin Terrace, waving when youngsters shouted greetings.

Two faculty members accompanied Torres. Meanwhile, three other teams were stopping by homes elsewhere in Washington’s attendance zone in Lancaster’s Southeast, where over 40 percent of households live in poverty, the highest concentration in Lancaster County.

Almost two years ago, the Mayor’s Commission to Combat Poverty set a 15-year goal of halving Lancaster’s 29-percent poverty rate, identifying so-called community schools — which enlist outside partners to meet needs of the disadvantaged — as one of many initiatives to pursue.

While the term “community school” may bring to mind a place, it’s better understood as an equity strategy, one that helps children in high-poverty schools keep up with peers in middle-class schools.

While the term “community school” may bring to mind a place, it’s better understood as an equity strategy, one that helps children in high-poverty schools keep up with peers in middle-class schools.

For some years, the School District of Lancaster, serving 11,300 students in 21 schools, has had six community schools, and a seventh is under development.

Washington Elementary — with 96.5 percent of students in or near poverty — began implementing community school strategies in 2008. Ever since it has quietly but purposefully found ways to swing a wrecking ball at barriers to student success. Principal Kathleen Wiercinski says her school aspires to be a model for others.

One core emphasis at Washington is building relationships with parents, some of whom may have never liked school. 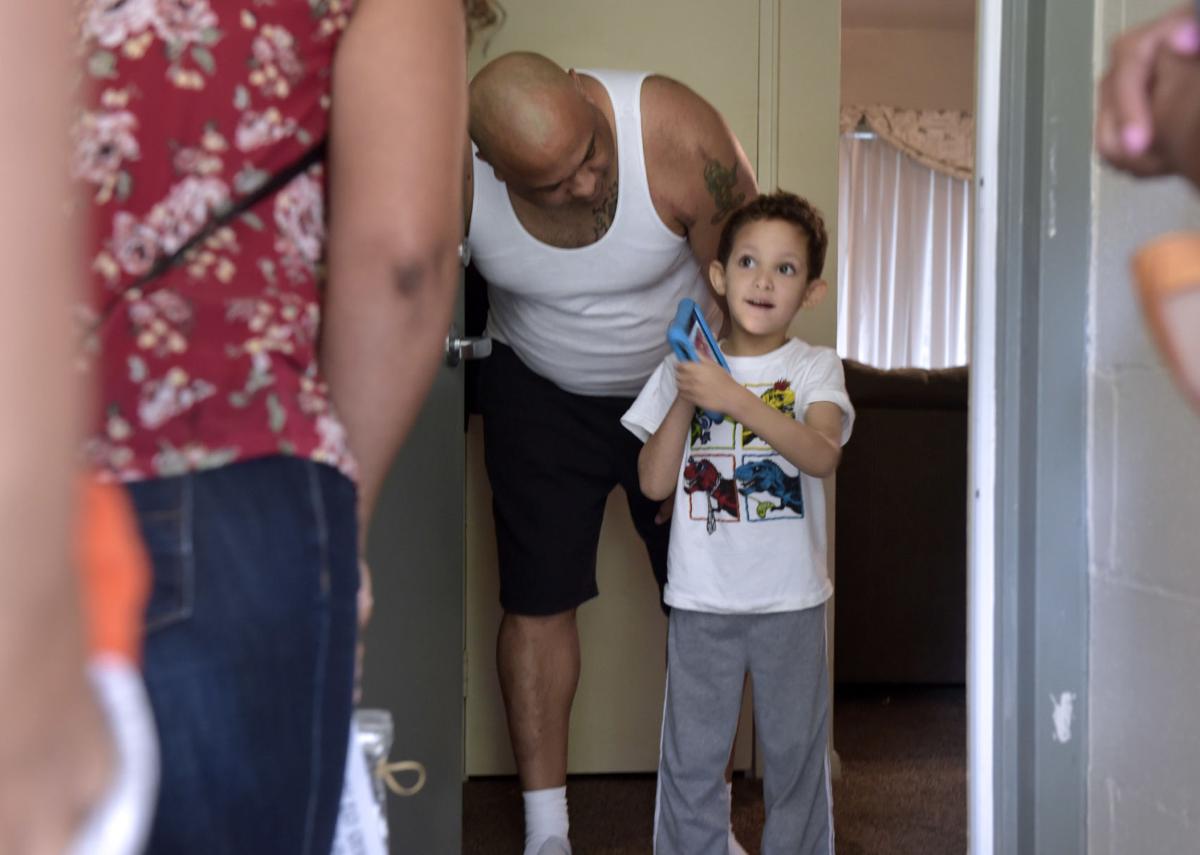 Dropping in on parents in August, Torres and his colleagues reminded them of orientation and immunizations. They also hoped to leave them with a sense that they and their kindergartners are becoming part of a supportive community and that they belong.

As the educators were heading to another home visit, someone called out, “Torres!”

They turned to find Angel Martinez, a father the team had just visited, approaching with chilled bottles of water for the perspiring crew.

Just south of Hand Middle School on a campuslike block along South Ann Street, 554-student Washington Elementary is a broad, two-story, 44-classroom building, bright and well-maintained after a major upgrade eight years ago.

Each school day before 8:30 a.m., children stream down sidewalks or climb out of vehicles idling between traffic cones. Meanwhile, about 60 educators get set for a day in which they may not have the luxury of just being teachers. At any time a child may enter a classroom burdened by a challenge arising outside of school.

Any school would, of course, try to get help for a struggling child.

But at Washington, educators have allies in the trenches with them. They are outside providers who can help with problems like hunger and housing insecurity that interfere with learning but are beyond the expertise of teachers to solve.

The Boys & Girls Club has been Washington’s lead partner since 2011, and Arelis Perez, a Boys Club employee, works full time at the school as the point person for community school work, freeing the principal to focus on improving instruction.

A quick, effective response to a child’s difficulty is in a community school’s DNA. So, too, is looking beyond crisis management and trying to change or improve systems to prevent problems.

A quick, effective response to a child’s difficulty is in a community school’s DNA. So, too, is looking beyond crisis management and trying to change or improve systems to prevent problems.

If a child shows up for school without required vaccinations and physicals, a school health clinic can step in, solving that immediate problem.

The aim is to keep a child from missing a beat in class.

But Karen Schloer, Boys & Girls Club executive director, said Washington is also asking the bigger questions, such as: Why do some families fail to get medical checkups for their children? Do they have transportation needs, language barriers, work conflicts? And what can be done about it?

A new teacher at Wickersham in Lancaster, Byers showed her fourth graders a photo of her family’s holiday feast for an exercise about traditions at Thanksgiving.

When Byers noticed one girl wasn’t participating, she asked her why. The girl explained that her family doesn’t do anything over the holidays.

The girl looked at her. “We don’t even have a table,” she said.

Byers never forgot that response. When she came to Washington in 2012 and learned about its community school framework, Byers grasped its potential and jumped on board. 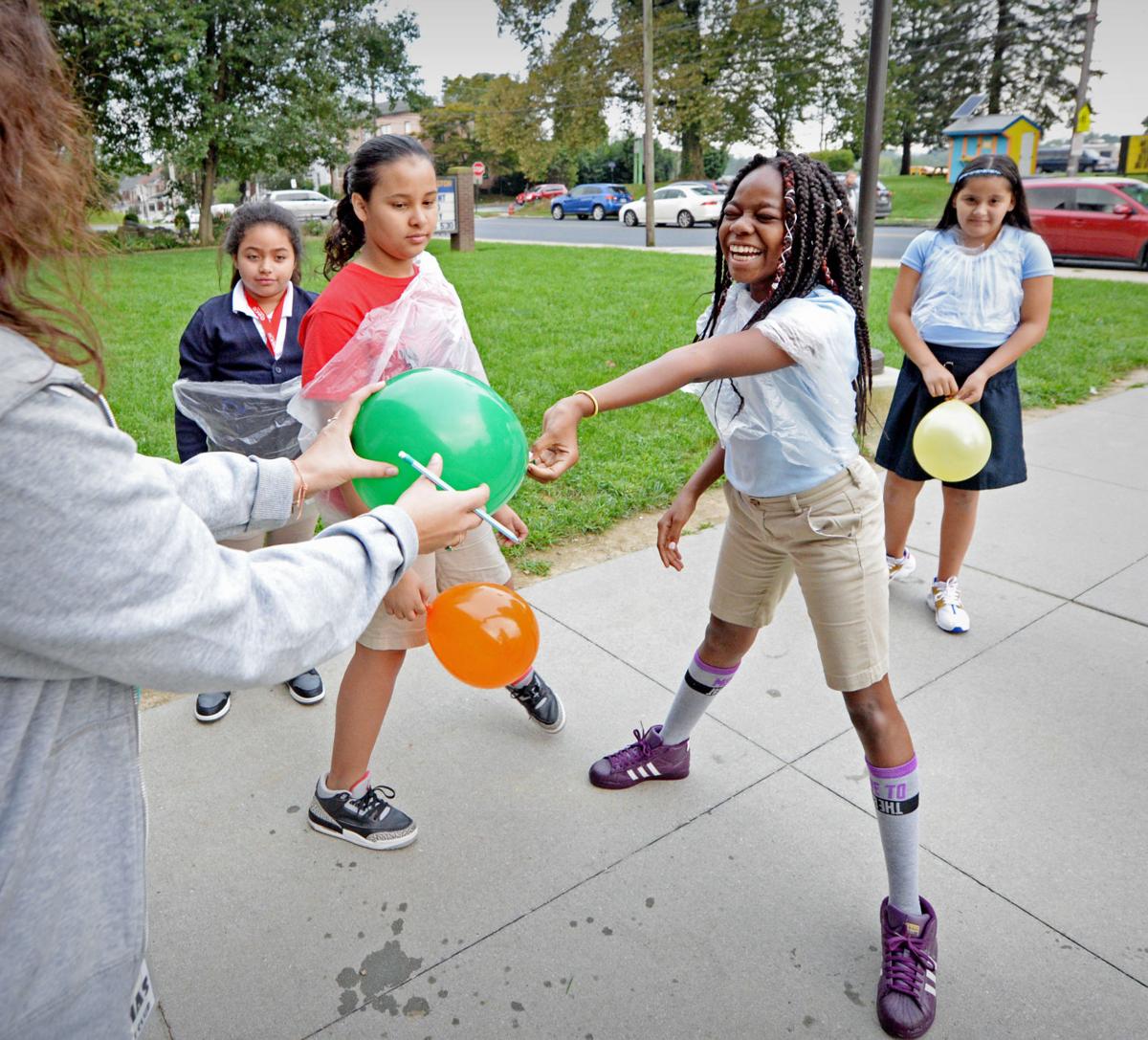 Even in the rain and snow, the grounds of Washington became a gathering place for unsupervised children, sometimes an hour before doors opened at 8:15 a.m.

The Boys & Girls Club responded to the safety concern last year with a free, before-school program called Wake-Up Washington. About 27 to 30 kids attend.

It’s an example of how a community school makes a difference.

Starting at 7:30 a.m., the kids enter a side door where Lori Pagan, program supervisor, greets them with hand slaps and happy talk.

“Good morning, Sunshine,” said Pagan as one student entered on a recent Thursday. To another, she said, “Look at you, awesome person. Always stylin’.”

The Boys & Girls Club chose science and technology as the program’s focus. There’s nothing ho-hum about it.

On a recent morning, staffer Addy Mathias led seven girls in investigating how a sneeze disperses germs. The girls emitted fake sneezes that showered the floor with a riot of shredded paper. Then they went outside with balloons containing trickles of food coloring. Screams ensued when they popped the balloons, sprinkling themselves with fine droplets. 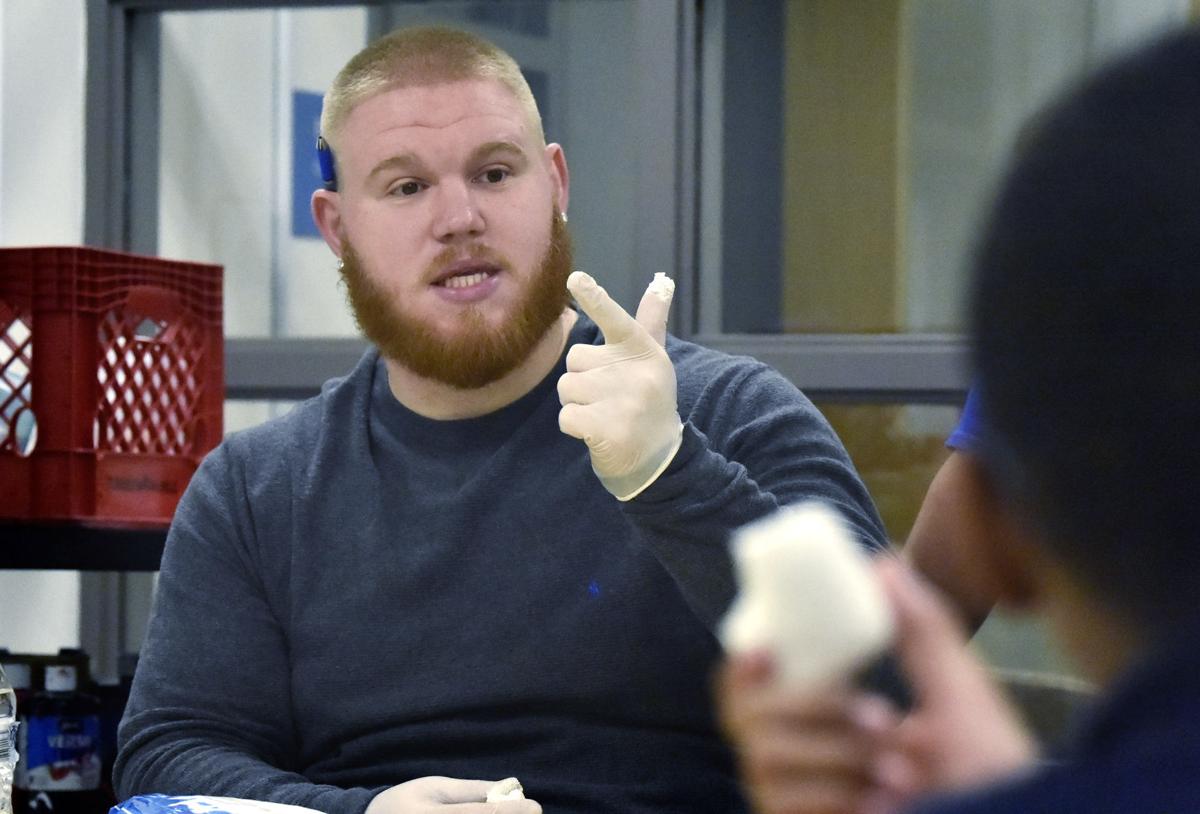 Elsewhere, staffer Ray Smith-Chant, working with a group of 14, talked about the five senses and lobes of the brain. His prop was a sack of marshmallows that didn’t last long.

For the Halloween season Smith-Chant plans hands-on lessons about blood and the cardio-respiratory system.

But Smith-Chant said engaging STEM projects is only part of why kids come back each morning.

“I think it’s also the relationships we form,” he said. “We’re asking them about their day. They talk to us about their issues.” 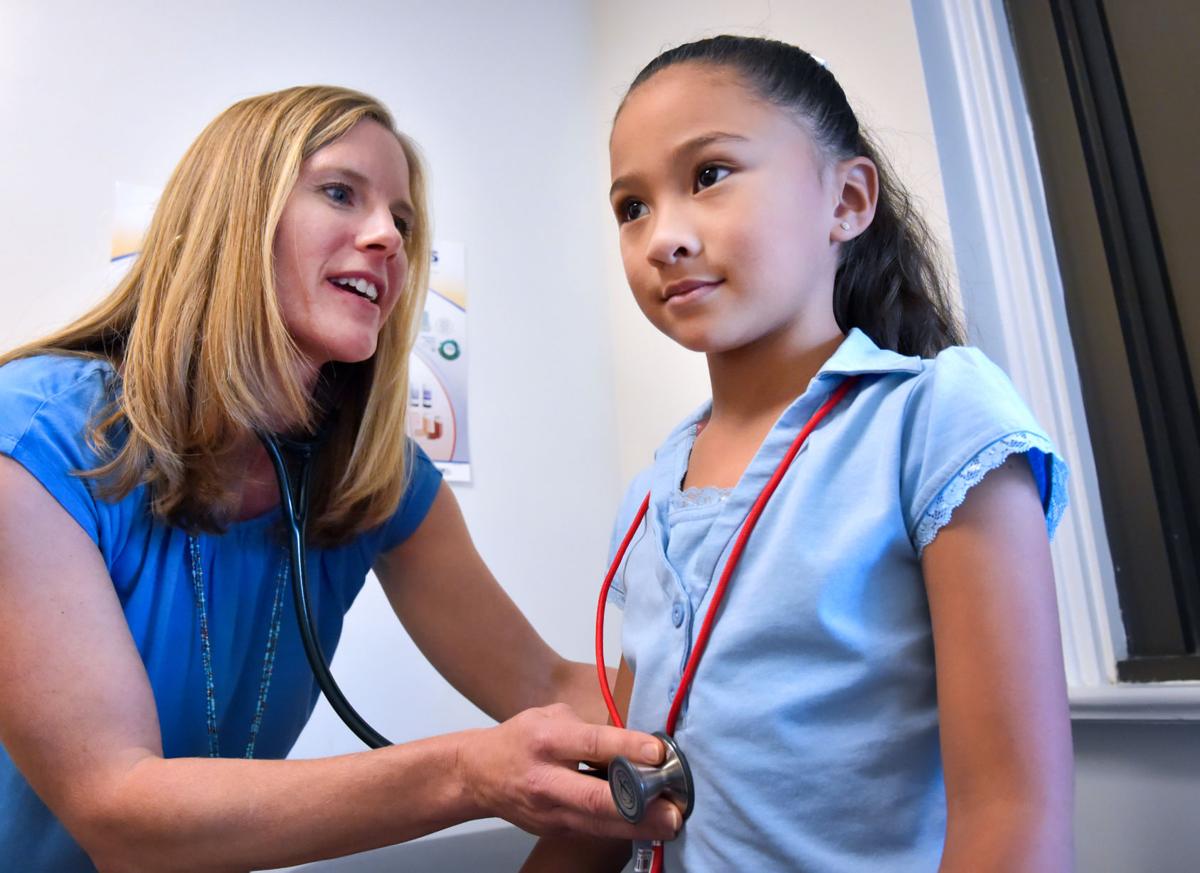 Teresa Weitz, a physician assistant with Lancaster General Health, sees children for minor conditions three days a week, saving them a trip to the doctor and minimizing lost class time.

Similarly, two counselors from T.W. Ponessa & Associates are in the school five days a week to see students. And Conestoga Eye runs a monthly clinic, providing free exams and glasses.

In addition, Washington families benefit from other supports: 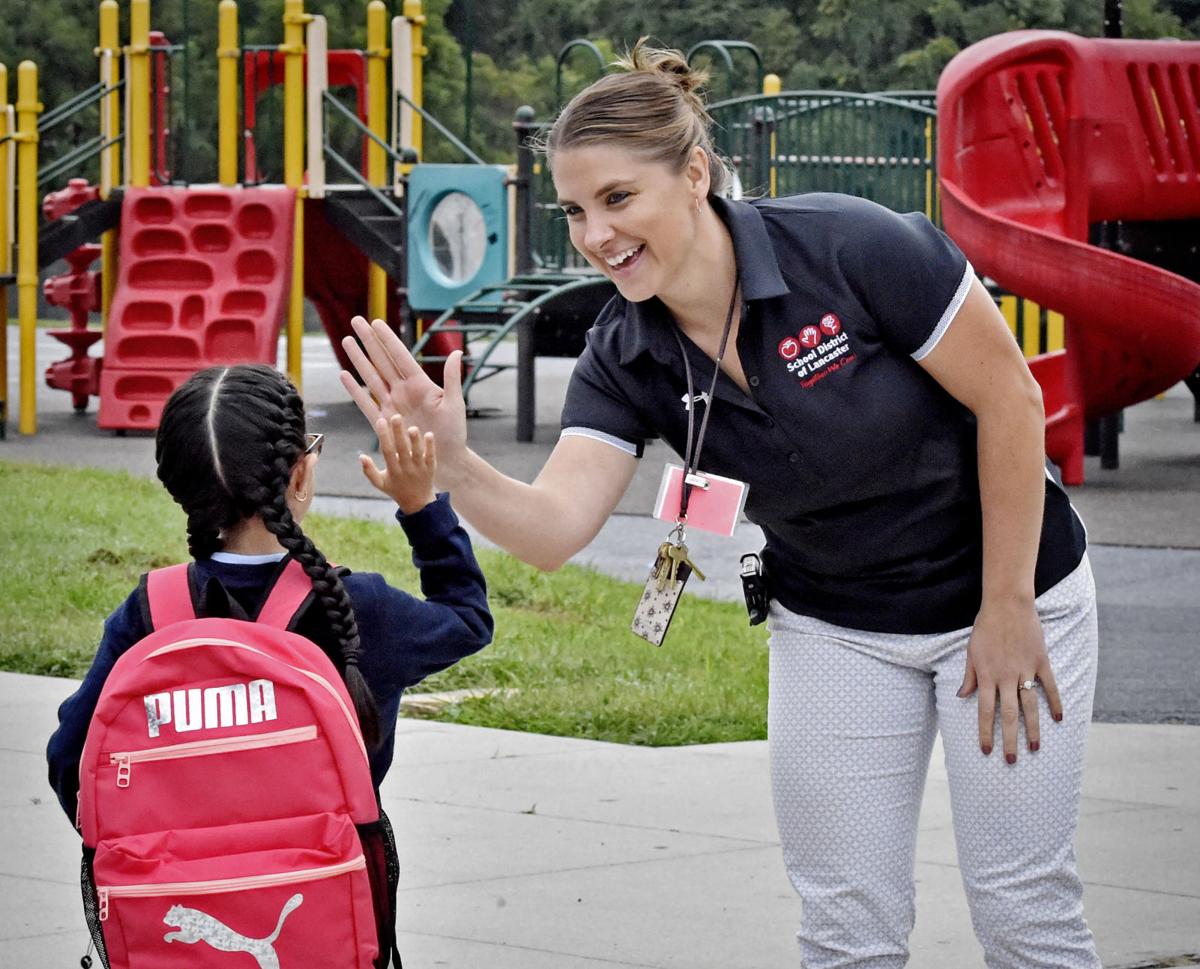 “It’s so convenient,” Rebeca Aviles said of the health clinic.

When her 6-year-old daughter, Ketzia, came down with a sore throat and slight fever, the physician assistant saw her and spared Aviles a trip to the pediatrician and lost hours at work.

But the anecdotal evidence that these programs are helpful collides with the reality that most of Washington’s students struggle academically.

State data show that, year after year, well over half of third, fourth and fifth graders are testing below grade level in reading, math and science.

And the school’s own testing shows many 5-year-olds are already behind their peers when they enter kindergarten.

“Yeah, we can get kids what they need, but how else can a community school impact instruction, because that’s why we’re a school,” Perez said. 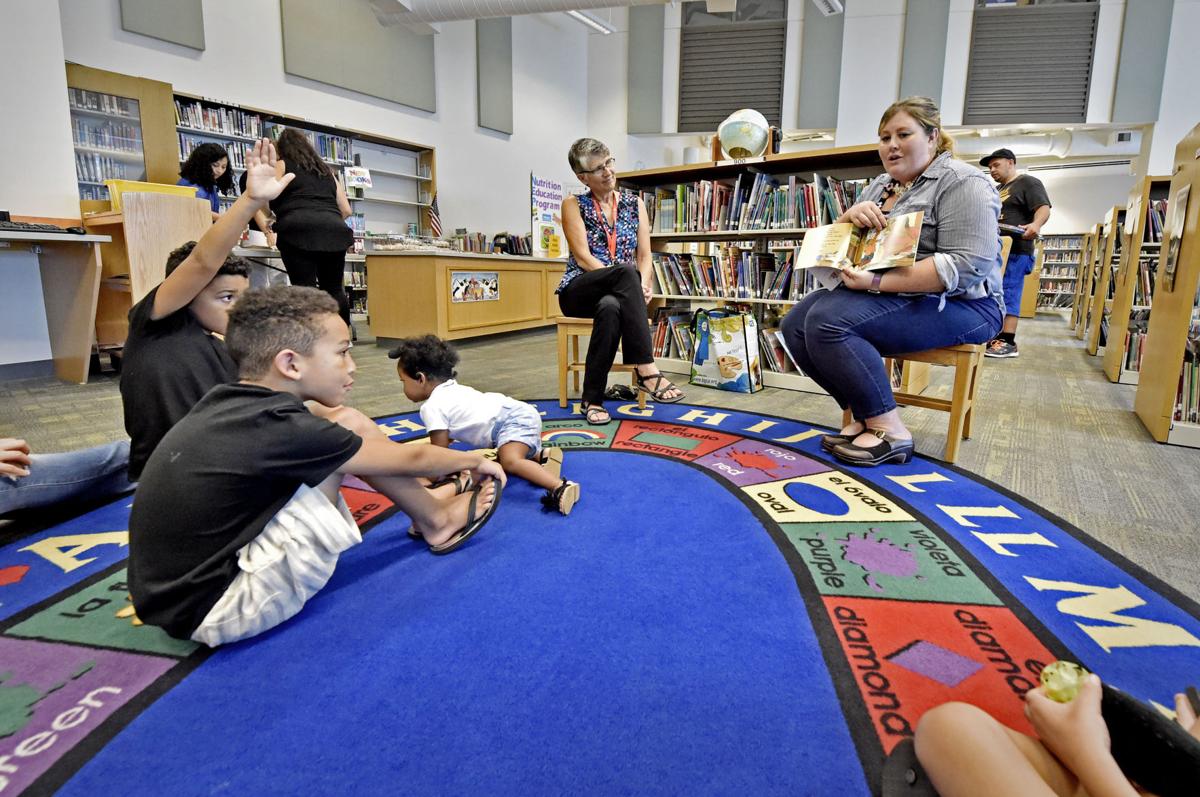 Wiercinski, now in her third year as principal, recognized that for her K-5 school to be successful, it needed to influence the growth and development of infants and toddlers who were future Washington students.

And so the community school headed down a new avenue known nationally as prenatal- to third-grade, or P-3 for short.

Research backs up the value of working with vulnerable families as early as possible — even before the mother gives birth — and of sustaining support until the youngest child finishes third grade.

A family development specialist will this month begin visiting up to 20 Washington parents who also have preschoolers or infants. Once or twice a month, she’ll mentor them in child development and literacy skills.

The specialist will be based at Washington but work for Parents As Teachers, run by Community Action Partnership. United Way is funding the position for three years.

The community school framework supports academic growth in other ways as well.

Over the summer, students and parents came twice a week for Books on Break, a two-hour program in the library that featured story time, lunch and a book to add to home libraries.

And six Saturdays this school year, Washington will host Unplug and Play, an hourlong gym program for ages 1 to 8 and their parents.

Will efforts like these move the academic needle? The jury’s out.

The principal recognized that for her K-5 school to be successful, it needed to influence the growth and development of infants and toddlers who were future Washington students.

“Because a child went to a community school, we can’t guarantee they will graduate from college,” said Erin Conahan, coordinator for family, school and community partnerships at School District of Lancaster. “But by having schools that are safe and engaging places for kids and families, they are showing up. They are able to get their social and emotional needs met.”

In the Lehigh Valley, Conahan noted, Lehigh University, United Way and the Bethlehem company that makes Peeps candy teamed up to create a community school at a middle school. Conahan would like to see similar corporate/higher-education partnerships increase the number of community schools here.

Linda Hernandez said Washington has come a long way since she started teaching art there in 1999.

She recalls a time when the school struggled to earn the parents’ trust.

“We had to work, work, work to build bridges (to parents) to get through the school year, and basically start over in September every year,” Hernandez said. “But now the kids and parents look forward to being in our building, and (they) see us when they have a problem.”

Lisa Wood, another teacher, thinks the success comes from the school conveying to parents that all are in this together.

“They all know my name. And that feels great. That makes me feel like somebody.”

“It takes both home and school to give the child what they need to thrive and learn,” Wood said.

Nearly 40 parents turned out on a recent Thursday for breakfast in the library. Teacher Bianca Palmer spoke about how to help children manage emotions and develop empathy and positive relationships. It was a topic parents had suggested for one of the monthly get-togethers.

Each parent went home with a blank refrigerator magnet on which they were to write encouraging messages to their children.

“I just love the fact that they make you feel like family here,” said Tamisha Rodriguez, 33, whose son, Elijah, 10, and daughter, Serenity, 7, are Washington students. “They all know my name. And that feels great. That makes me feel like somebody.”

“For me, this is not a school,” Solis Padilla said. “It’s a second home for my kids.” 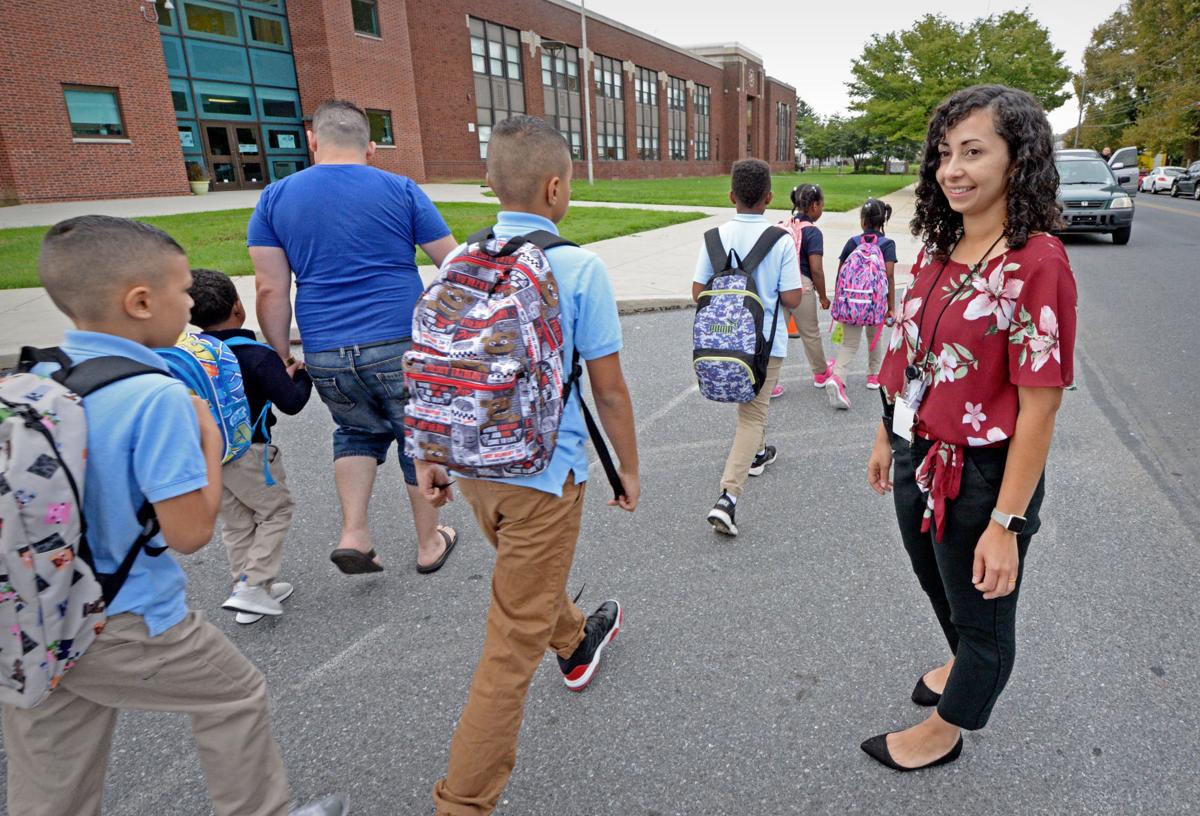