by Brian Nguyen in Crispus Attucks Community Center on November 10, 2021 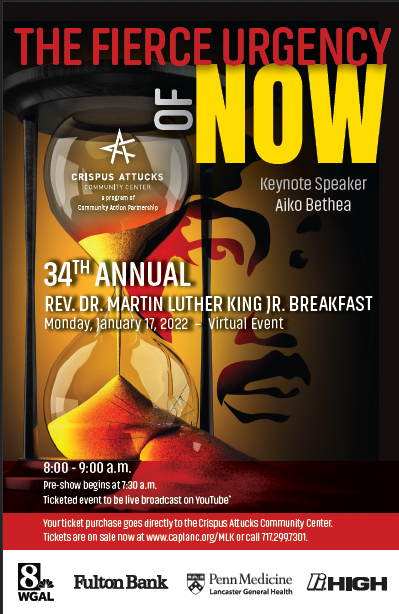 Lancaster, Pa. – For nearly 100 years, the Crispus Attucks Community Center (CACC) has stood in Lancaster as a pillar of African American history and legacy.

The Center is named for Crispus Attucks, a Black man who was the first American killed in the Revolutionary War, of whom the Rev. Dr. Martin Luther King, Jr., said, “He is one of the most important figures in African American history, not for what he did for his own race but for what he did for all oppressed people everywhere. He is a reminder that the African American heritage is not only African but American and it is a heritage that begins with the beginning of America.”

Part of the Center’s continued commitment to amplifying the Black voice is through its annual hosting of the Rev. Dr. Martin Luther King, Jr., Breakfast. This event, the Center’s largest fundraiser, annually raises $100,000 in critical funds for the Center, nearly 1/3 of the its yearly budget.

Out of an abundance of caution and concern regarding COVID-19 and its variants, the Center will once again be hosting a fully virtual event. The theme is “The Fierce Urgency of Now” in reference to Dr. King’s 1963 “I Have a Dream” speech in which he said, “We have … come to this hallowed spot to remind America of the fierce urgency of now. This is no time to engage in the luxury of cooling off or to take the tranquilizing drug of gradualism. Now is the time to make real the promises of democracy. Now is the time to rise from the dark and desolate valley of segregation to the sunlit path of racial justice. Now is the time to lift our nation from the quicksands of racial injustice to the solid rock of brotherhood. Now is the time to make justice a reality for all of God’s children.” This virtual event will be live broadcast and will feature all the elements faithful attendees have come to expect, including energetic performances, inspirational awardees and an exceptional keynote by Aiko Bethea.

Ms. Bethea is a leader, builder and connector, and has successfully navigated a dynamic career with roles spanning government, philanthropic, nonprofit and private sectors. After leading a legal team at the City of Atlanta under the direction of Stacey Abrams, Aiko served as Director of Compliance for the City of Atlanta and Deputy Director of a compliance department at the Bill & Melinda Gates Foundation. Most recently, she was Head of Diversity and Inclusion for Fred Hutchinson Cancer Research Center. The founder of RARE Coaching & Consulting, Aiko uses her gifts as an executive coach to guide leaders and teams of Fortune 100 companies and global nonprofit organizations in removing barriers to inclusion. And she has been recognized by Forbes as one of the top seven anti-racism educators for companies.

Since the late 1920s, the Crispus Attucks Community Center has been an anchor in Southeast Lancaster City. The Center takes immense pride in its mission to improve the quality of life for youth and families in Lancaster by providing services that promote community prosperity, physical and mental health, and by offering programs and cultural events which preserve and celebrate the African American heritage. For more information, visit caplanc.org/crispusattucks.

The Community Action Partnership is Lancaster County’s largest anti-poverty organization, helping income-constrained families move toward economic empowerment. CAP’s service profile interrupts generational poverty with programs that support families and individuals at every age and place in life, in the areas of education and child development, health and nutrition, household stability and safety and empowerment. For more information, visit www.caplanc.org.