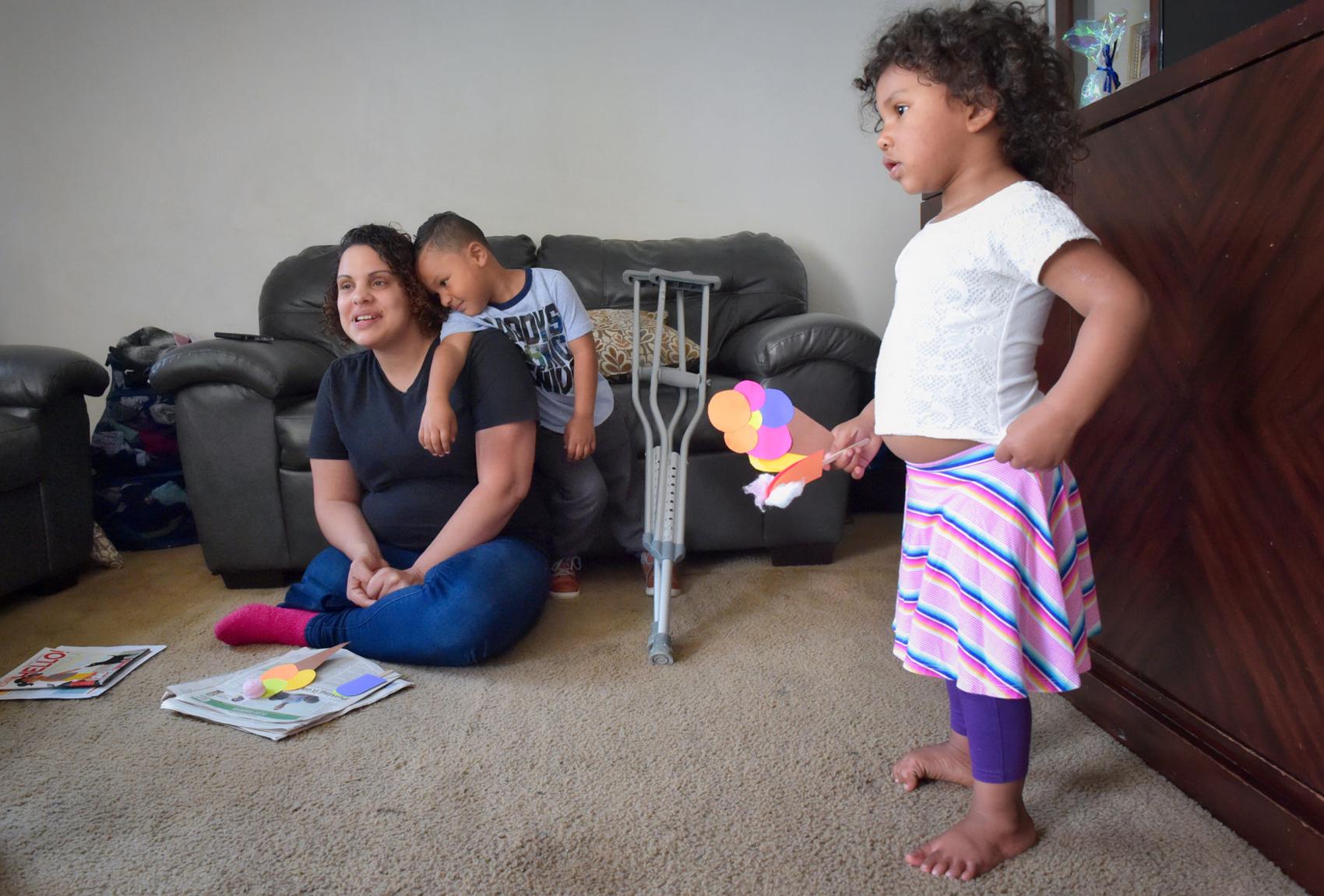 Anna Rodriguez and her children are involved in a program called Parents As Teachers, which provides home visits from a family development specialist. This program, and a wider initiative called prenatal-to-third-grade, or P-3 for short, seek to help very young children get a better educational start.
DAN MARSCHKA | Staff Photographer

by: THE LNP EDITORIAL BOARD

Head Start and other high-quality, preschool programs seek to level “the playing field for at-risk 3- and 4-year-olds. But some experts say more benefit may be gained by reaching even younger children and their parents,” staff writer Jeff Hawkes wrote in last week’s Sunday LNP. “Because children in poverty fall behind more affluent peers at an early age, even prekindergarten can be too late to help them catch up.” Enter an initiative known as prenatal-to-third-grade — P-3 for short — which is based on research into how a young brain’s development may be hampered by deprivation or helped by nurturing from birth, or even before birth.

It’s devastating to think that as early as infancy, a child might be deemed to be “at-risk” — that is, at risk of failing in school, of being trapped in poverty, of even facing a diminished life expectancy.

“The achievement gap exists in kindergarten,” Andrea Heberlein, a United Way of Lancaster County staffer and P-3 advocate who oversees an education task force for the Coalition to Combat Poverty, told Hawkes.

And that achievement gap opens up very early in a child’s life.

As a National Association of Elementary School Principals publication noted in 2013, “Data from a nationally representative sample of children, the Early Childhood Longitudinal Study — Birth Cohort 2001, reveal that gaps in what children know and are able to do appear as early as 9 months of age. Not surprisingly, these gaps only grow over time.”

And sadly, those gaps — if not addressed — can doom a child’s lifelong opportunities before he learns to tie his shoes.

It is a monumental challenge, but it is critical to free children from the life sentence that the “at-risk” designation can be. So we laud those who are working to launch prenatal-to-third-grade, or P-3, programs in Lancaster County.

The P-3 Partnership, Hawkes noted, “received $298,000 from the United Way to hire a P-3 coordinator and increase options for preschoolers in the Ephrata, Lancaster, Manheim Central and Penn Manor school districts.”

Koser told Hawkes that she sought ways to boost student achievement in her seven years as principal at Fulton Elementary School, where poverty is a significant factor in students’ lives. She regrets not having partnered with the day care centers in the school’s neighborhood, having missed an opportunity to bring kindergarten teachers together with day care teachers so they could help students transition from one level of education to the next in a seamless way.

She clearly is making up for it now by promoting P-3 education in Lancaster County.

Both Koser and the United Way’s Heberlein were alerted to the power of P-3 at a conference last summer. They brought consultant David Jacobson of Massachusetts’ Education Development Center, the P-3 conference’s speaker, to Lancaster for three days in May to meet with groups of education and community leaders.

According to Hawkes’ story, Jacobson called P-3 “the leading edge of reform,” the “single most powerful approach that we have to improve outcomes for low-income children in the United States,” and one that should find support among both conservatives and liberals who already agree on the importance of a child’s first eight years.

Education can be faddish. But the importance of P-3 education is backed by research. Again, we refer to that National Association of Elementary School Principals article: It is during the years from birth through third grade “that children acquire the skills, behaviors, and dispositions that are foundational as they transition to later learning.

“Cognitive, social, emotional, and physical development at a young age allows deeper and more complex skill development throughout life. Neuroscience, molecular biology, and genomics all point to the early childhood years as the most promising window of opportunity during which to influence children’s lifelong trajectories.

“Brain development is most rapid and ‘plastic,’ ensuring greater possibility for neural connections to reorganize and adapt to external influences. Positive, nurturing, and engaging interactions and experiences lay the foundation of skills and behaviors that contribute to children’s later success in school and beyond.”

Ensuring that children have “positive, nurturing and engaging interactions” from birth means helping vulnerable families before the mother gives birth. And then, as Hawkes noted, “sustaining support until the youngest child finishes third grade.”

It can be frustrating, yes, that some parents are ill-equipped to care for their children. But leaving them to struggle only means their children will struggle, too. And so the cycle of poverty goes on and on.

We’ve repeatedly advocated for quality prekindergarten education, which also is championed by everyone from district attorneys to academics to military leaders because it benefits all of us when children are prepared for school and lifelong learning. It benefits employers (who need skilled workers), the armed forces (which need educated recruits) and taxpayers (prekindergarten education is far cheaper than building prisons).

Now, we are excited by the prospects for P-3 education in Lancaster County. We hope state lawmakers and county officials are excited, too, by this promising new front in the quest to stem intergenerational poverty.

Because, as Hawkes reported, there are lengthy waiting lists for the government-funded, research-based programs that are working in this county toward this aim. And time is of the essence for the children who need those programs.